Modern technology is changing the world faster than ever. While it does have its downsides, the benefits are amazing in all segments of life. In photography, it attracted more people than ever to embrace the art and skill of capturing images. Smarter and smarter cameras allow even beginners to take some amazing shots. It makes the learning curve steeper and the learning process more fun. However, there are still many mountains to climb and lessons to learn. Chromatic aberration is often the kryptonite for new photographers. What is it, and can you get rid of it?

If you have seen many photos (is there anyone who hasn’t?), you have most certainly seen the chromatic aberration (CA). It is an unwanted effect when the objects in the image show unnatural pink, red, green, cyan or purple fringes in high contrast areas. Or, in the corners of your image. The phenomenon is better known as “purple fringing”. It sounds almost appealing like some exotic technique or something, but it is an enemy, and it is a tough one.

Even experienced photographers sometimes struggle with chromatic aberration (CA). The properties of light allow this effect that is sometimes hard to avoid. To explain this we have to go back to high school for a moment to find out more about this phenomenon.

While passing through the lens, light is bent and ideally, it converges at your focal point. However, different colors have different wavelengths and any lens imperfection will cause different colors to miss the focal point. As a result, you will see the colors where they shouldn’t be in your image. Strictly speaking perfect lense doesn’t exist, but fortunately, high-quality lenses will give slight and invisible aberrations in most of the cases.

There are two types of CA: axial and lateral CA.

Axial aberration is also called longitudinal. It occurs when one or more colors converge in front of or behind the focal plane. In the image, it usually manifests itself as a blurred green or purple fringe. It can appear almost anywhere in the frame. Even in the center of the image. Usually, it is in front of or behind the object in focus. Contrasted edges are prone to LoCA as well as wide apertures. Using a zoom lens at a wide angle will probably result in CA.

“Photography has always been about capturing light.” – Om Malik

If you like nature photography, it can be very frustrating to capture a rare sight of an animal, only to find out that it is ruined with blurred colors and flare at the edges, because of chromatic aberrations. Luckily, there are some easy ways to prevent or fix this, but more on this later.

Lateral or transverse CA arises when all of the colors hit the same focal (vertical) plane, but not in the same point. There is some complicated physics behind this, but it is not necessary to know it. In the image, it shows as sharp color fringing. It appears alongside high contrast edges. Unlike the axial aberration this type of aberration tends to be visible towards the corners of the frame. Whatever the object that creates contrast, fringing colors are complementary. This means that if you have dark wood in front of the lit background, the left edge of the wood will appear red and the right edge will be green. Other combinations are possible such as blue and orange or purple and yellow.

How to Save The Day

There are many easy ways to prevent CA. Unfortunately, many of them include changing the angle of the light or your focus. This can completely change the story that you want to convey. So, sometimes preventing it means losing the perfect caption of the moment. In such cases, you should go for the shot and if you get the distortion, you can fix it later in Adobe Lightroom. But, let’s go one step at a time.

There is an easy fix for most of the cases of an axial CA. Faster apertures are prone to axial aberration, so stepping your lens down for one or two stops will do the trick. Make sure that you slow down your shutter speed and increase your ISO to compensate the light. This doesn’t work with a transverse CA.

High-quality gear is much less prone to CA. While you don’t have to go for the most expensive lenses, try to avoid very cheap lenses and teleconverters. “Prevention is better than cure.” It is a famous quote of Erasmus of Rotterdam that applies to CA as well. So, whenever possible try to avoid or at least reduce fringing, and consequential post-processing. 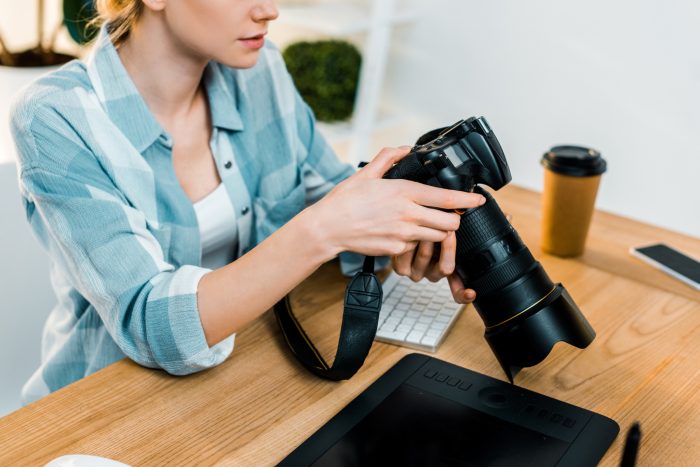 Before you change your settings, try a simple trick for stopping chromatic aberrations. Change your distance from the subject. Sometimes that will be enough to solve the problem.

Avoid high contrast compositions and reflective surfaces. Shooting against the bright sunshine will likely result in some CA. If you really have an amazing scene with high contrast, shoot in RAW so that you can take care of it in post-processing. If you use a zoom lens, don’t go for extreme values. Both the shortest and the longest focal length increase the risk.

Accurate focus can reduce or eliminate fringing. Well, at least the axial blur.

As for the transverse aberration, placing your subject in the middle of the frame can do the job. Yes, it will ruin your composition, but sometimes you can crop the image afterwards to restore the desired composition.

How to Fix Aberration in Adobe Lightroom

When nothing else works we resort to miracles of modern technology. If the aberration is not horrendous you will be able to fix it in no time. Firstly, find the Lens Corrections panel. Then just click on the ‘Remove Chromatic Aberration’ checkbox. That’s it. If there’s still some aberration, you can fix it manually. In the Manual panel, you will find two color hue sliders for green and purple fringing. Move the sliders to further reduce or even eliminate aberration.

There are even more options in the Lightroom but these simple steps will do the trick in 99% of cases. If you need more corrections it gets more complicated and you risk to affect other parts of your image.

“Photography is about finding out what can happen in the frame. When you put four edges around some facts, you change those facts.” – Garry Winogrand

Photography is all about passion and telling the story. Don’t be afraid to tell yours and to make some mistakes in the process. When it comes to chromatic aberration it is not so dreadful after all. You can improve your knowledge and skills to avoid most of it. And you can get rid of it in the post-processing. So, grab your gear and go search for your next story.